The Law of Inverse Relevance

The Public Libraries and Museums Act 1964 is supposed to set out the framework in which the minister superintends and promotes the library service to ensure it is comprehensive and efficient for all that desire to use it. The minister is only ever one person so within the act a framework exists so the minister has a body to advise him/her on library matters including if any of the authorities are breaching their duties to provide the service under the act. The body that was setup was called the Advisory Council on Libraries, they fulfilled the role under the act to:
“advise the Secretary of State upon such matters connected with the provision or use of library facilities whether under this Act or otherwise as they think fit, and upon any questions referred to them by him”
The problem is when the current government came into power they had a “bonfire of the quangos” and decided to abolish the ACL.
Vaizey has cast about trying to find some other group or body to take over this role as his eyes and ears but the MLA (also no abolished) and the arts council (which has been savagely cut) both have categorically said that this wasn’t/isn’t their role. In the government response to the select committee on libraries they had another go and suggested that the 5 regional relationship managers could feed back to the department and minister to presumably make the government act within the law again in relationship to the act. Considering there is only going to be five of these relationship managers they cannot conceivably superintend 30.2 library authorities each to ensure their compliance with the act, even if ACE agreed to go along with it.
The reason I am going on about all this is I put in a FOI to the DCMS about information on when the last met, the meeting notes and current members.  They released the meeting notes, the last of which was on the 4/Feb/2010 before the current government even came into power. The last advice issued from the body to the minister was on 07/Dec/09! There are according to the FOI still two current members of the body who I intend to contact but a body in this sense cannot consist of two people. Their terms end on the 11/Feb/2013 and 02/Aug/2013. I intend to contact both of these individuals and ask them why they are not advising the minister. The ACL if it still existed would be hamstrung because the minister refuses to define what the act actually means. But the minister has been without the statutory body to provide him with advice for over three years: 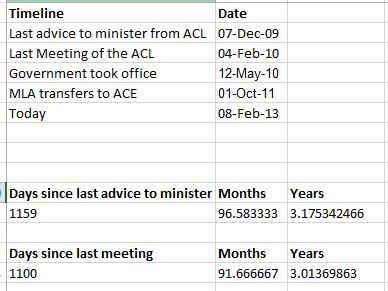 Not only does the minister break the law by not intervening when the destruction of the library service is ongoing, the minister has no idea what is going on because there is no one to advice as it clearly states in the act. See no evil, hear no evil and say a lot of half-truths, spun stats on closures and piffle seems to be what the library service is getting from the government.

Below is the link to the FOI, many thanks to Shirley for suggesting it.