Following on from previous posts on Walcot library in Swindon which you can read here and here the short version is when the volunteers took over the running of the library and it became part library part charity shop the book issues fell off a cliff:

We now have the savings Swindon Borough Council have made from cutting the staffing from the library, making it a co-location charity shop and handing it over to volunteers: 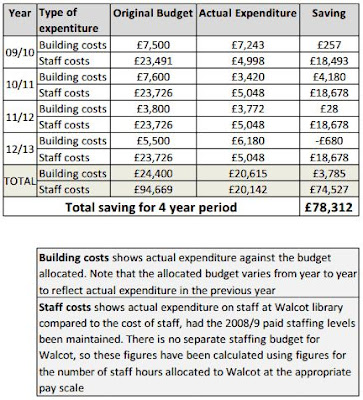 As you can see there is a small saving on building costs and a small saving in staffing which coupled with having the charity shop within the library and less choice of books has resulted in my view in the 87% drop in book issues since April 2009. Considering the current net annual budget for Swindon is 137m this is less than microscopic peanuts. Even in the context of the library service budget of 3.9 million its such a small saving and has utterly destroyed the book issues in the library its a futile, pointless saving. In the CIPFA library comparisons, the staffing costs are not above the average, the costs that are driving up their average per 1,000 pop are all the other spending areas so its odd they choose to cut the staffing rather then look for savings in service support, computing costs etc which wouldn't have impacted on the book issues like this has. The book issues in the other libraries on average have held up well (see the the other posts), its only Walcot that has dropped off a cliff like this so the experiment has failed, cutting staff and co-location with a charity shop has almost destroyed the book issues of this "library"

I struggle to understand the reasoning behind why they have done this to the library, there is certainly no body of evidence out there to suggest this works either as a cost saving measure or creating a sustainable library. I suspect the reason is the "localism" agenda and "The Big Society" those tired empty policies from the men in the empty suits with the empty brains in Westminster. Hopefully it will become clear, even to those with closed minds and open mouths that sacking low paid library assistants and managers doesn't save money in the library service. Libraries are far too important to be lost for such a stupidly small amount of money in budgetary terms. I haven't looked up the data but you can tell from just driving round the area that Walcot is an area of real poverty, they shouldn't be cutting its library they should be throwing more resources at it. Councils cannot create growth directly, but if they invest in the minds of the citizens that's more likely to help the area climb out of poverty than building endless retail parks.