A cynic is what an idealist calls a realist.

Now that Oxfordshire County Council has passed its latest budget cuts, they're going to completely abolish the mobile library service. This is completely at odds with their responsibility under library act. But we've known beyond doubt for a long time now that Lazy Vaizey won't lift a finger. I suspect even if the councils decided to set fire to all our libraries, he'd not be "minded" to do anything. I've asked the councillor responsible how they still think this is a statutory service, I await the answer with interest.  There has been lots of handbags over the cuts between the tory councillors and Call Me Dave. And now the latest twist in the saga is the PM and other local MP's have said they back the idea to abolish the county council and have the district councils become unitary authorities, its in the local paper here. Whether this is really revenge by Cameron or not I've no idea, the districts who have very little to do would love the chance at more money and power. Oxford City Council are so bored that they even tried to bring in a bylaw saying buskers have to smile when performing last year. (ffs!)

Councils procure most of their services these days in supposedly competitive tendering. Having the roads, schools, libraries and fire service etc, all split out into more bodies to have to procure these services is completely stupid. Anybody not motivated by getting more power for their own little empire or having half a brain would realise that its a stupid way to proceed. Sadly there seems to be little political appetite to have one unitary Oxfordshire authority. The political vested interests are against it. But if people was put before party, the clear way is on unitary with a elected mayor and a pr voting system to give proper representation to voters and have one body for the area delivering all the services and sweeping away the bored and restless tier of local government.

In Swindon down the road, a FOI was put in to see how Walcot library was doing on book issues and you can read stuff I wrote here detailing how the book issues fell off a cliff when the library was handed over to volunteers. The latest data is here and it short here is the trend: 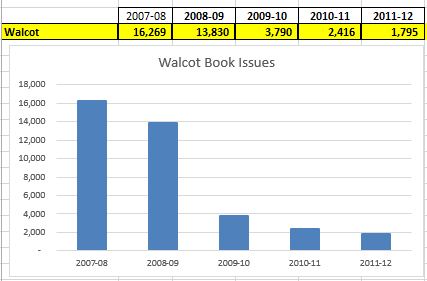 From 16,269 in 07/08 and 14/15 figure is 1650. So if you spread this level of "success" across the library service in Swindon, I cannot see it being anything other than a huge disaster. The other libraries between 07/08 didn't have this catastrophic drop, only Walcot. Again where's the DCMS and the minister riding in to the rescue? Its clearly a hugely diminished service for very little saving. They're not going to solve the inter generational illiteracy in Wiltshire by less people reading books.

The final thing I wanted to briefly talk about, now the taskforce has been given more money and time to deliver whatever it is they're supposed to be doing. Its a scandal there's still no user representation on the taskforce. Same old faces from the same old bodies kicking the can down the road, purely with the purpose of giving Vaizey a defense when he's accused of doing nothing for the library service. I've suggested they ask the TLC to suggest someone to go on there. The comments on the taskforce blog are better and more insightful than the jargon filled content they're currently producing. These are particularly good.